The woodland patches on the Downs are mainly beech plantations with some sycamore and sparse understorey. The woodland fringing the steep Plumpton Bostal contains some Ancient Woodland Indicator species, as well as some old beech trees.

On the slopes at the foot of the Downs the woodland contains mainly sycamore, ash, field maple, whitebeam, hazel, wayfaring tree and dogwood.

Two woods on the clay to the south of the Greensand ridge – Plumpton Wood (4.88 ha) and Grannie’s Wood (2.81 ha) – have been designated Ancient Woodlands. Both are largely hazel coppice with oak standards (trees that have not been coppiced but left to grow tall for timber). Plumpton Wood includes an area that has been replanted with Thuja and Norway spruce, and Grannie’s Wood includes ash. Patches of alder occur in the wetter areas.

To the north of the Greensand ridge, the woodlands lie on Weald clay and differ in character from those in the southern part of the Parish. Hornbeam predominates, much of it old coppice that has assumed the stature of high
forest. Both of our two native species of oak– pedunculate oak and sessile oak – are present, along with hazel, wild cherry, wild service tree and Midland hawthorn. Clumps of aspen grow in the damper areas.

Four woods in this part of the Parish have been designated ancient. Riddens Wood is mostly old hornbeam coppice, with some introduced trees and shrubs on the site of a former garden within its boundaries. Plumpton Wood (North) (6.9 ha) is old hornbeam coppice with mature oak and ash, which a survey in 1986 (see bibliography) noted as having the largest list of ferns and flowering plants in the Parish (at least 100 species), including 22 Ancient Woodland Indicator species. The other two designated ancient woodlands are Letchmore Wood and Polecat Wood, which are also mainly old hornbeam coppice with oak and other species.

Shaws are typical of the Sussex Weald. These narrow wooded strips between fields were left when the original woodland was cleared for cultivation. These abound in the Parish and in places they connect woodland sites and may be important wildlife corridors. Some contain old coppice and in the spring, like the adjacent woodlands, are carpeted with bluebells and wood anemones. 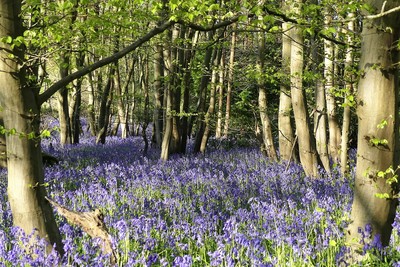 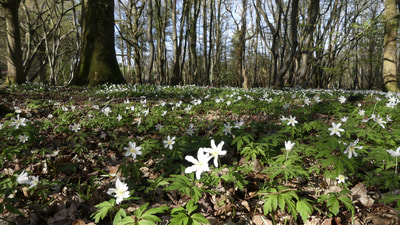